Herby, I'd like to present a new game based on Tibia principals: 3Dragons - Tibia 3D.

There were a lot of rumors about Tibia 3D in the past. I estimate that approximately the same amount of people heralded potential success to the project as in oppose to the other half, claiming it's going to inevitably kill Tibia's "old-school" climate. We are a group of developers who played Tibia in the past. We've heard all of that before, we've been there. With the new technology that is currently within reach of our hands and 15 years of professional experience we will try to convince you you should give it a try.

But what is 3Dragons really?

In fewer words ever: it is a remastered, 3D, modern version of Tibia game enriched with a couple of new systems.

This is a quick list 3Dragons game will consist of​
Broader context, ultimate goal
If you are OTS creator yourself, you should be focused right now, as ambition of 3Dragons game is to be a bridge between OTS community and the rest of the games. Wait... what the hell does this mean? It means we'd like to share our knowledge and technology with you, allowing you to eventually port your Open Tibia Server into completely own game that you can easily deploy to mobile devices or release on Steam, increasing the range of potential players... drastically.

Thanks to Unity framework it is that easy.

If you like the idea of modern Tibia, please join us. If you are OTS creator and would like to let yourself to carry away, support us. If you are neither of these both, give yourself a chance to win a free t-shirt!

Our Discord is able to address your questions:

Check out the 3Dragons - Official community on Discord - hang out with 139 other members and enjoy free voice and text chat.
discord.gg 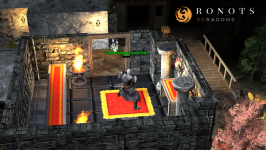 Looks interesting
Do you have any gameplay video?
S