Little introduction
Hey! I would like to do a tutorial about RPG mapping for beginners which is quite up to date (however I will work on 10.98 protocol).

What I mean by "RPG touch"?
Tibia and all Tibia-based servers/projects are just games. There is no point in trying to make everything as real as possible, maps needs to be playable and you need to remember that maps exist within specific environment and perspective. But still, we can add small details, giving our map a depth and story and making it more interesting. Cities are important part of the gameplay. They are "homes" for players and their characters. You can rest here, supply or sell/buy some gear. Probably you also make friends here or just socialize with others. That's why they need some extra "touch" to serve people well.

How to start?
Before starting work on a map, relax and think. What kind of city do I need for my players? A village, capital-main city of kingdom or a small port for adventurers on some unfriendly land? This will roughly tell you how much space do you need and what your city should has in terms of buildings and other places. Then you should think of environment, it would be really good to be consistent and keep some logic behind your design. So, what's the most important thing for civilization and humanity? I would say water, especially fresh and drinkable water. Of course Tibians don't need to drink water but I hope that you get my point of view on this. You should think of a water spring or a river going near or through your settlement, if you want to make it bigger than just few houses. We can't forget about wells (some of them are more than 10.000 years old!) but I think we can agree that in Tibia they are more like decorations rather than something necessary. Summarizing, my advice is to locate your settlement near some source of drinkable water. It will make your settlement more reasonable and will open for you a field of possibilities how to build around or along this water or maybe even use exemplary river and expand it to canals or as a source for a fountain. Ok, let's jump to buildings.

Part one: core buildings
Important note, following examples are not part of the same map/design. They're just suggestions not connected to each other

Temple
We are from different countries and cultures, we may be believers (or non believers) of different faiths, but somehow all of us call this building the same way - temple. It plays a big role in a life and within a settlement. Probably for all Tibia characters this is the first place they see in game and sadly they will keep seeing it on they journey 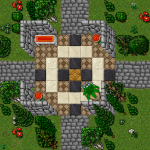 It is very simple but doesn't look like a special building. You can feel like someone wants to tell you "just forget about it, you just need to respawn and move on, keep playing". But we are here to make it more RPGish, to add some climate. We can follow some real life patterns like churches and mosques or ancient/medieval sanctuaries, but we can also do something completely new. The main thoughts that should accompany us in creating the temple is that it is a very important building and probably one of the oldest. Maybe even someone serves here and takes care of the place. 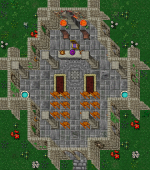 There is a center point for respawn, there are few columns and extra oblique walls to support the whole construction and some chairs/thrones to make us think that this is a place for people, they gather here and pray or sacrifice something. You can also think of cemetery which are often next to sacred buildings. Or maybe even a small garden with herbs which are grown by monks? 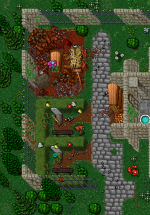 Deposit
One of the main buildings in Tibia cities. Everyone comes here to store their items, people also advertise their offers or just chill/rest and talk with others about recent events. Of course you can't forget about post office! You can also add a banker but this is totally up to you. Strong point of making seperate building with the only or second banker (if you put first one in a depot) is that you can arrange some quest in it or put inside or close to the bank a jeweler, creating a sense of uniqueness or wealth of the settlement district. 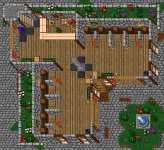 Shops?
This is a tricky one, there two problems: the meaning of shops and their location. Today lot of us live in big cities with huge shopping malls, we can find almost everything in one place and apart from some gastronomy, everything is manufactured outside these places. In the time period we are referring to (I mean something similar to "medieval fantasy") there were no big malls with many different shops, there were markets for the specific products or fairs e.g. once a week or month. You could also buy or order something at certain place of production. We can connect this with a "player friendly" solutions but we should avoid the situation when you can buy everything at one place, the situation known from Evo ots, in my opinion it kills the unique RPG feel of the ingame city.

So, shops should look like workshops! Or at least it would be nice if they do. Of course, you don't have to put them in random places around the city, they should be near the main roads or other important buildings like deposit or bank.

Ok, what kind of "workshops" should be in Tibia RPG city?

For sure we need a forge or armourer/blacksmith workshop. They need fireplace to craft equipment and an anvil. You can make for your worker some little storage with wood and coal, you can also put some metal things there. 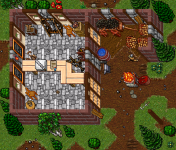 Now we need some magician that also makes potions. Let's add some herbs nearby, distilling machine and some weird... magician stuff. You know, magic is a complicated topic so their machines and secrets should be complicated too 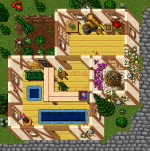 As I said before, we can also build some markets, not only workshops. So let's put some buildings and market stands for basic stuff, like tools and food maybe? The butcher probably does some work with meat at his shop, so give him a place to do it. Most of the farmers live outside the city, they need to transport their goods, so put some carts or wagons near their stands. 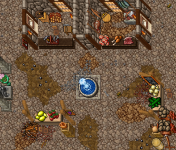 At the end I will recycle my old map to show you another example of deposit (this one is smaller) together with a separate bank building.