Are you curious to find out how the Wheel of Destiny has shaped up since the
You do not have permission to view link please Log in or Register
we gave you in July? Let us dive right into it!

The design process and development of the Wheel of Destiny has been driven by our goal to give players an opportunity to further specialise their characters based on their needs and playstyle as they level up. Starting with level 51, all promoted characters on Premium accounts will gain 1 promotion point per level which they can spend in the Wheel of Destiny. A level 1000, for example, has 950 points to spend.

Neither spending nor removing points will cost you anything! We want you to be able to freely try out which of the benefits suit you best or are most useful to you in a specific scenario, be that hunting, bossing or PvP. Whenever you have promotion points to spend, simply open the Wheel of Destiny and spend your points. You can do this any time! To remove or reset already invested points you have to be in a temple, though.

The Wheel of Destiny is divided into four domains. Each domain contains nine slices. So in total, there are 36 slices which you can fill with points to improve your character: 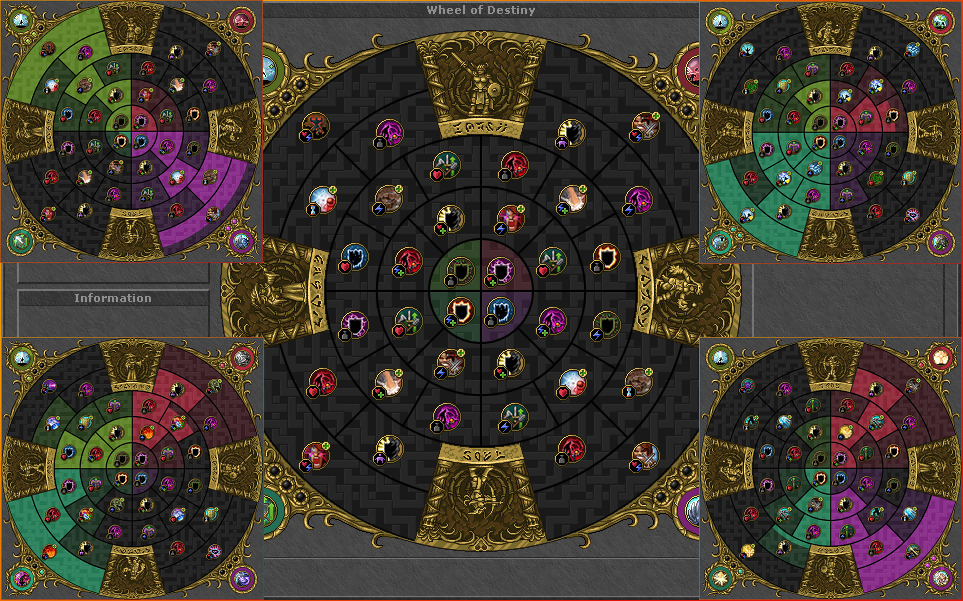 If you have not yet distributed any points in the Wheel of Destiny, you start in the centre with a limited choice of perks to choose from: there are four slices which you can fill with points. As soon as you have filled a slice completely, you will be able to invest points into the adjacent slices. Thus, you can branch out and make your way towards the outer circle where the strongest perks can be unlocked. Each vocation has a unique wheel with its own spells and effects, but there are some overlaps.

Take Up Your Shields Again

Adding multiple new unique mechanics to the game presented us with a good opportunity to also change some underlying mechanics of the game and to dust off overlooked systems. In particular, we took a closer look at the shielding skill and damage mitigation in general. Our goal was to breathe new life into the defense attribute of shields, into the shielding skill and into making your choice of combat stance matter more.

To achieve this, we created an additional way of damage mitigation that benefits knights the most. We decided to add a new characteristic with the winter update:

Mitigation reduces all damage of the common damage types (Physical, Earth, Ice, Fire, Energy, Holy and Death) by a percentage. This percentage will be calculated based on several factors:

This new stat will benefit players as well as monsters, including bosses, so some of your foes can be a bit more chewy.

To accommodate for the new and improved use of the shielding skill we had to adjust the Protector spell and bring it in line with its offensive counterpart Blood Rage. Hence, its increase of the shielding skill will be reduced. Instead of raising the skill to 220%, it will now raise it to 135%. Now this might sound like a harsh nerf, however, the spell's actual impact will be greater due to the addition of Mitigation.

We also consider it important that Tibia remains a dangerous world which requires its adventurers to stay vigilant. Thus, we will slightly increase the damage of monsters that are of medium or higher difficulty in the Bestiary. As of winter update, medium monsters will deal ~1% more damage, hard monsters ~3% more and challenging monsters ~5% more. This will have no impact on bosses.

In our next teaser, we will let you in on the potent new spells and abilities that are waiting for you in the Wheel of Destiny so stay tuned!